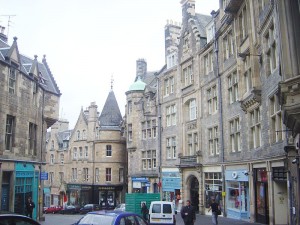 In between slaving away writing posts for your beloved soaraway Shoot Up I have a day job. That I’m actually employable may come a surprise to some of you – but there we are. Anyway, I won’t bore you with the details of my job as it usually requires a plethora of pencil-drawn diagrams to explain what the hell I actually do, but I will – instead – tell you about our office.

I work in the west end of Edinburgh, within a World Heritage Site and in a Grade One listed building that was built in around 1825. As the whole street is heavily protected it’s a wonderful example of classical Georgian architecture with the massive, imposing and somewhat gothic St Mary’s cathedral dominating the far end of the street. Which is nice.

However, every silver lining inevitably has a cloud. The Grade One listing means that we can’t really do anything major to the building – like have wonderful modern things, such as central heating, or double-glazing, or windows that actually fit into their frames. As the rooms in our office are all double-height and we have floor to ceiling sash windows this is somewhat problematic come winter. The bitter Scottish wind simply blows through the massive gaps in the frames, around my feet and chills me to the very marrow. Unfortunately, the massive marble fireplaces have been blocked up and so we can’t even warm ourselves in front of a roaring fire.

Anyway, now that November’s here we saw the first heavy frosts and really cold weather coming in this week. It was cold enough to see my breath in front of me – while in the office. This was undoubtedly a Bad Thing.

As usual I had lunch at my desk and was so fed up with the cold by the early afternoon that I paused and thought whether to put in a few less units of humalog, therefore letting my BG go really high and thereafter enjoy the inevitable hot flush that I have whenever my BG is off the clock.