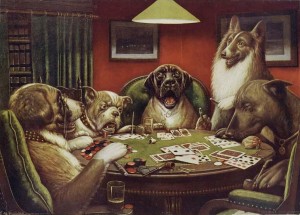 I often (well, only really when it gives me a theme for a post, but go with it) think that playing at being a pancreas is a bit like playing poker. You need confidence. You have to bluff your way through and show no weakness when it comes to gambling on that extra bolus to bring down the high. Show no fear at giving that extra unit.

My pancreatic poker face has slipped slightly lately. I’ve just started some new drugs for something or other and they don’t play nicely with the broken pancreas. The one advantage I have is that I’ve been here before and survived it so I have experience on my side. Sadly at the moment that doesn’t seem to be worth a lot.

Previous experience shows a few extra buckets of insulin are required to deal with the drugs. But last weekend, by the time I was up to 4 times my usual bolus ratio the stakes felt pretty high and I wasn’t sure I wanted to carry on playing my hand. At this point, all the extra insulin had managed to keep me at a kidney-frying, eye-blinding 18 for a whole day. The CGM had been alarming that much it was begging for respite.

So, by early evening I celebrated having halved my blood sugar to 9 and decided that was as low as I was willing to go for now. The drugs have a habit of creating huge insulin resistance and then falling asleep for a bit allowing service to return to normal for a while so I didn’t want to be caught running too low when that happened. If we were playing poker, this is the point where I would have banked my winnings and left the casino but there was no one to take over my hand so I had to carry on.

At 3am, the husband was awoken by a screaming CGM and a sweaty, rambling wife who when she finally submitted to a blood test was enjoying the hallucinogenic qualities of being a 1.3. After an hour the glucogel finally fixed the problem and the husband changed the sheets (what is it about diabetes and sheets?). Apparently he doesn’t like sleeping in a bed full of glucogel slime. He’s so fussy.

And so, I feel like I took as safe a gamble as I could and still got badly burnt. Which means my poker face has slipped and I’m a bit nervy about this high stakes game I’m in the middle of. I hesitate to double or quadruple my insulin even though I know that’s what’s needed. It’s tough getting straight back on that horse when you’ve just fallen off.

I think that’s where I’ll stop for now. A metaphoric mixture of falling off horses whilst playing poker in casinos with sticky sheets is enough to undermine anyone’s confidence!